Challenge
Improve the energy consumption of an electric aircraft through energy recuperation.

Solution
Pipistrel used the propeller as an airborne wind turbine, by transforming the energy created by the descension of an aircraft into electric energy and storing it in a battery. The performance of the propeller design was numerically computed with FINE™/Turbo.

Results
The aircraft consumes 6% less energy during the climb.
Net energy consumption during ascent/descent manoeuvres decreased by 19%.
A 27% increase in number of traffic pattern circuits was achieved.

The first electric aircraft was created by simply replacing the piston engine system of a normal combustion engine aircraft by an electric propulsion unit. Although environmentally friendlier, this was not an optimal design yet for an electrical aircraft.

Since the density of current state-of-the-art battery energy is still much lower than gasoline energy density, a need for optimal energy use in an electric aircraft is crucial.

One possibility to improve the energy balance of an electric aircraft, is using its propeller as an airborne wind turbine, where the energy of a descending aircraft is recuperated into electric energy and stored in the battery.

In the case described in this article, Pipistrel designed a propeller specially adapted for exploiting in-flight power recuperation this way.

The objective was to improve the energy consumption of the Alpha Electro, Pipistrel’s electric trainer aircraft.

Climb is the most energy consuming part of the traffic pattern. A new propeller EA-002 (Figure 1) was designed to exploit the possibility of energy recuperation while preserving good performance in the climb flight phase.

Optimisation of the Propulsion System

For the optimisation of the propulsion system, a 3-way approach was performed:

The performance of the propulsion units was evaluated by comparing and testing 3 propellers with the following two testing methodologies:

Climb & descent manoeuvres were tested according to these parameters:

The results from the climb & descent manoeuvre tests are presented in Table 1.

The AS-D and EA-001 have similar climb performance and recuperation capability. With the EA-002 installed, the aircraft consumes 6% less energy during the climb compared to the AS-D propeller and is able to recuperate 0.15kWh at the descent speed of 70kts. The propeller optimised for recuperation (EA-002) showed a 19% reduction in net energy consumption compared to the EA-001.

As can be seen from Table 2, the test pilot was able to carry out almost the same number of traffic patterns with the AS-D and the EA-001 propellers, and 27% more (compared to AS-D) with the EA-002 propeller. This resulted in better climb efficiency and higher energy recuperation of the EA-002 at a relatively low approach speed of 50 kts, which was kept constant for all three propellers.

A comparison was performed between CFD simulation results and flight test measurements of the EA-002 propeller. Two parameters were compared: the thrust and the propeller power coefficient.

Figure 6 and Figure 7 depict values of thrust and power coefficients versus advance ratio of the EA-002 propeller respectively. As seen in the figures, the design predictions of NUMECA’s CFD simulation results and the flight test measurements of the propeller are in good agreement.

Due to the reduction of the energy consumption, the aircraft can stay airborne longer and/or smaller battery packs may be installed for a specific flight time.

The EA-002 is set to become the first European Aviation Safety Agency certified propeller with recuperation capability for electric propulsion. 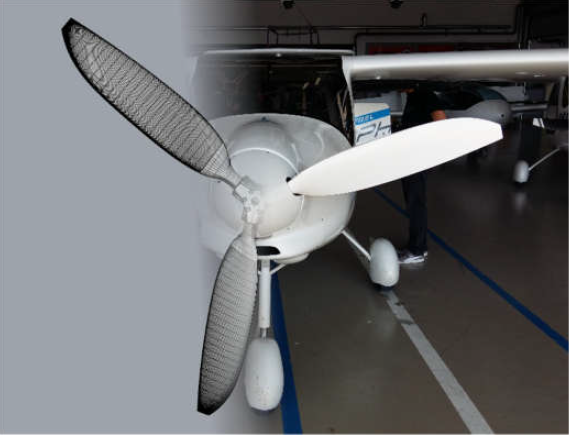 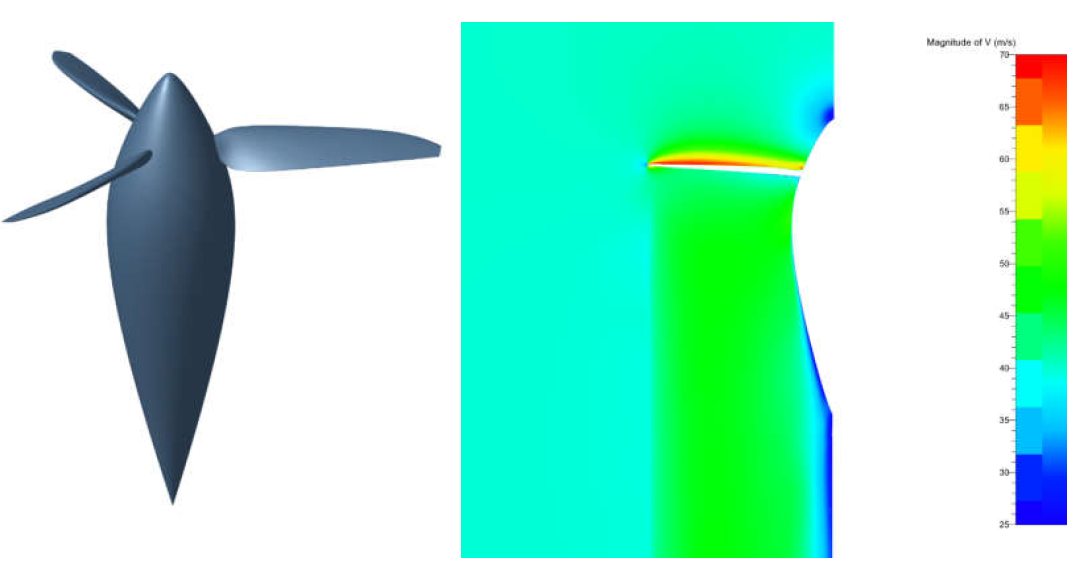 Figur 2: CFD geometry and velocity distribution over a cross section 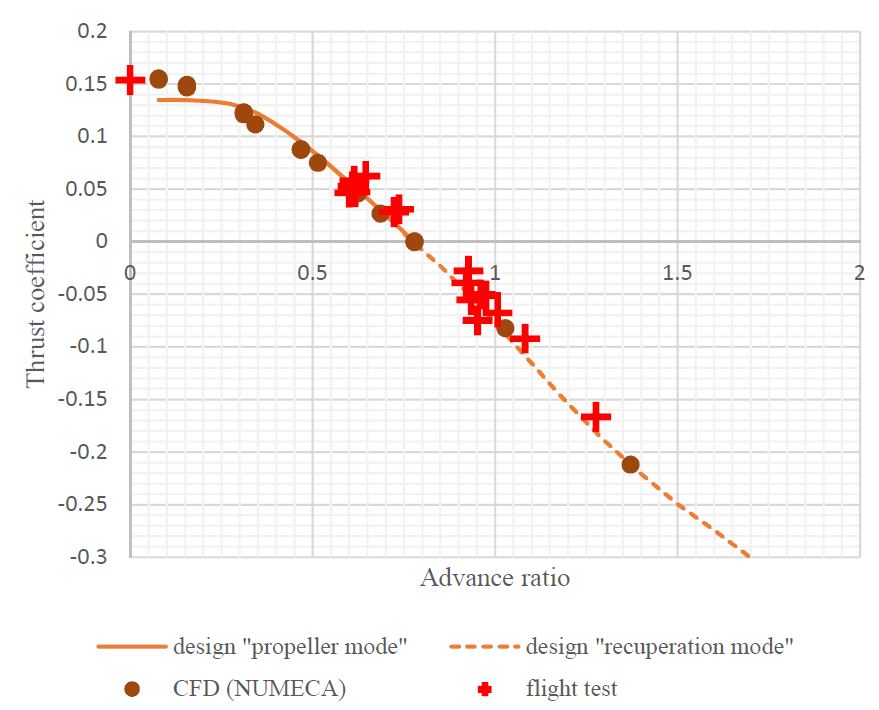 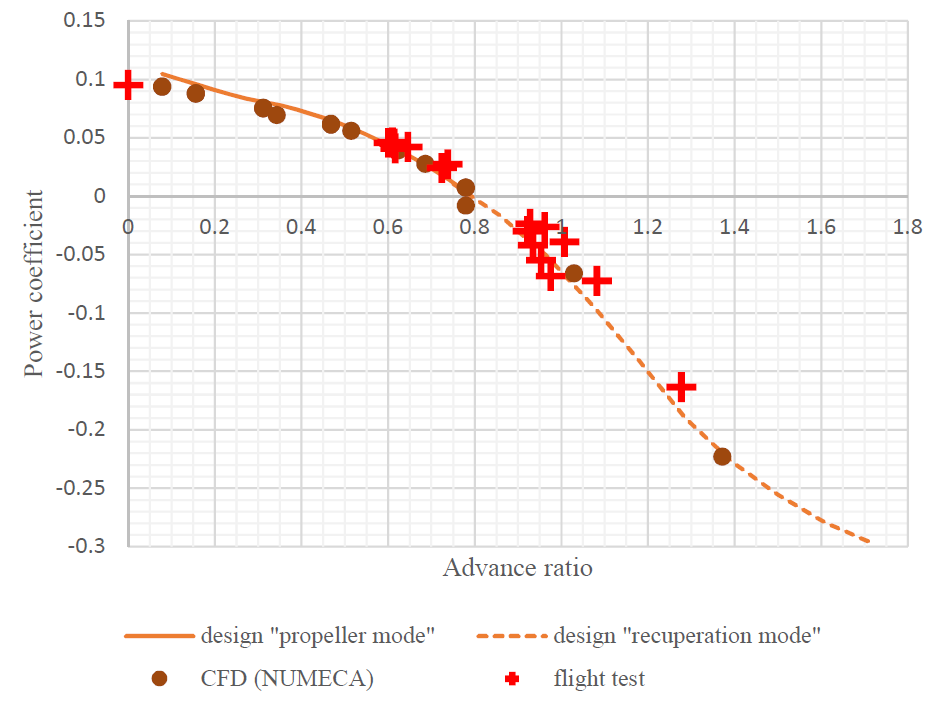 Figure 7: Design predictions, CFD and test flight measurements of the power coefficient of the EA-002 propeller versus advance ratio