NUMECA’s software tools were applied to resolve the unsteady flow field in a centrifugal compressor and to conduct an analysis of the tonal noise emissions in the surroundings of the machine. The compressor consists of four rows with an inlet guide vane, an impeller, a vaned diffuser and a return channel.

As a first step, the unsteady flow field was computed using NUMECA’s Nonlinear Harmonic Method (NLH) in multi-rank mode. That is, interactions between successive rows can be considered over several rotor-stator interfaces. Subsequently, the Turbomachinery Wizard of FINE™/Acousticswas applied. It is a powerful tool to efficiently predict tonal and broadband noise emissions for turbomachinery applications. With only a few clicks, the user can obtain the radiated sound power, as well as the sound pressure level at external microphones, using the Green’s function approach.

A first estimate of the tonal noise emissions can also be obtained with a brief post-processing in CFView™. Figure 2 shows the unsteady pressure perturbation (top left) along with the resulting spectrum (top right) for two points in the centrifugal compressor – one in the vaned diffuser and one in the return channel close to the outlet. The time signal was reconstructed from the NLH-solution and contains only contributions from the first three blade passing frequencies. Since the impeller is responsible for periodic oscillations in the compressor, the amplitudes are significantly higher in its vicinity than compared to the region close to the outlet. Subsequently, the resulting sound pressure level can be calculated from the amplitudes in the spectrum.

In summary, NUMECA’s simulation tools provide the means for an efficient analysis of tonal noise emissions in turbomachines. Both, the post-processor CFView™ and NUMECA’s FINE™/Acousticscan be applied to conduct a detailed analysis of the prevailing unsteady pressures and subsequently the resulting sound propagation. The next step will be to modify the compressor stage in order to reduce the overall noise production. 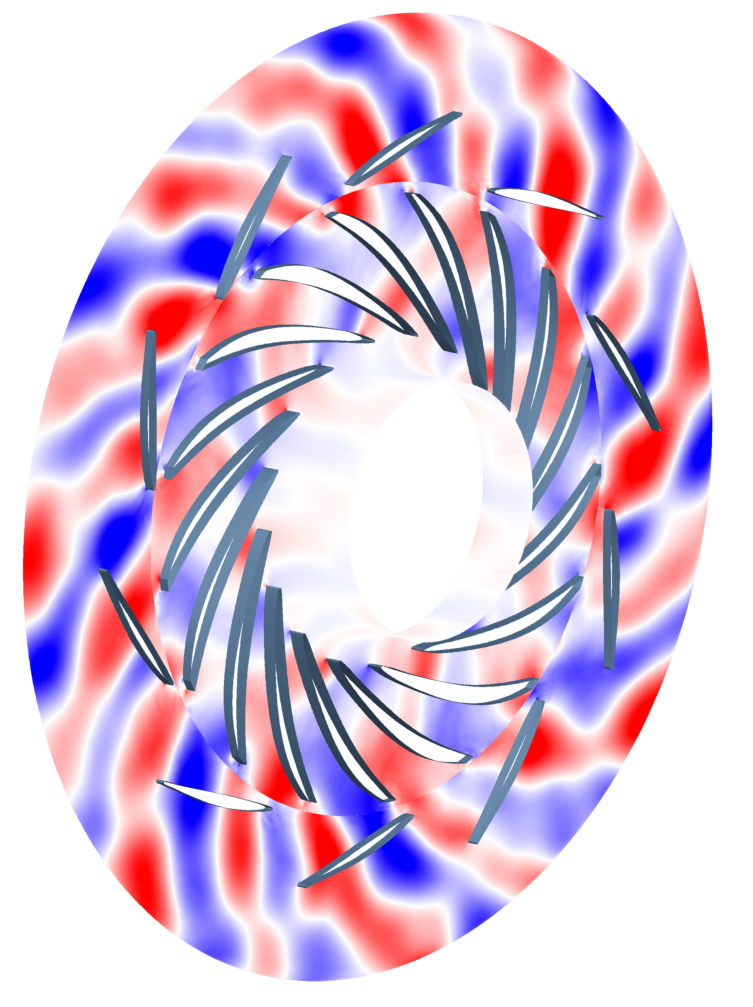 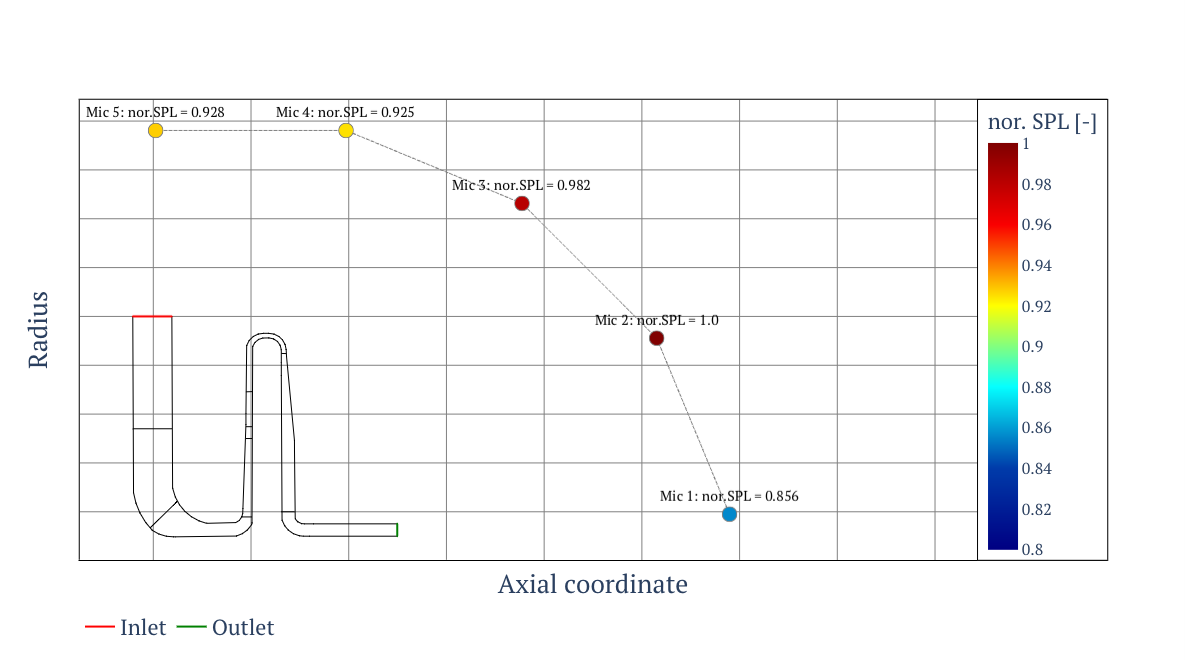 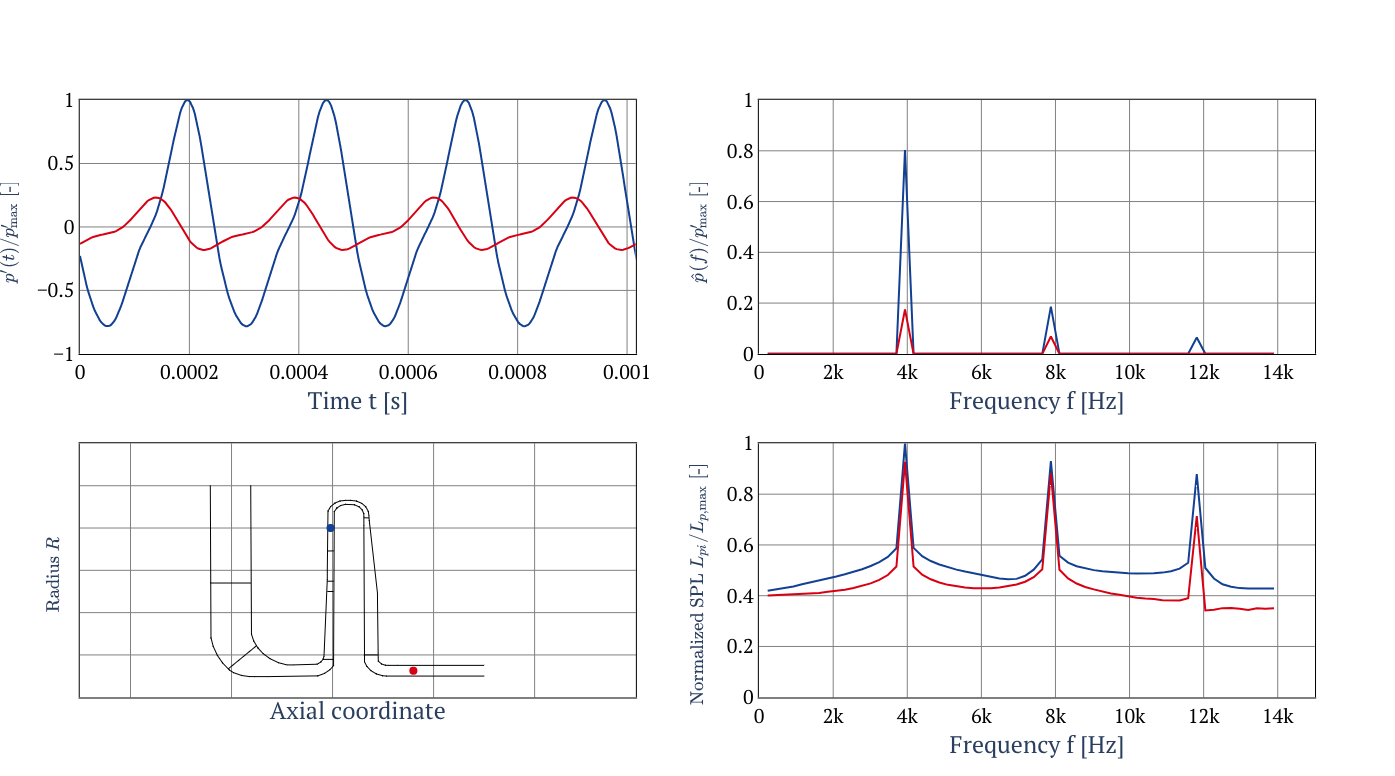 Figure 2: Normalized pressure fluctuation as a function of time (top left) and frequency (top right) and the resulting sound pressure level (bottom right) for two locations in the compressor for the first three blade passing frequencies.