Case Studies | What F1 Teaches Us About Aerodynamics

Let’s perform a thought experiment for a moment. Imagine a world where the field of aerodynamic theory was never explored. No one developed the Navier Stokes equations or even the fundamental theory of lift. Indeed, there would be no computational fluid dynamics; but beyond that, there still would be genuine changes in many things we take for granted.

Consider cars, for example. In this alternate universe, the car still exists. Engineers have continually improved upon the internal combustion engine to the point where a few engineers realize how fun racing cars can be. After several experiments and trials, these incredibly innovative humans recognize that the less a vehicle weighs, the greater the car can accelerate. So, in this world, the person who designs the lightest car wins!

This assumption seems like a good first impression of the racing industry, but in real-world car design, only optimizing this one variable (weight) would yield disastrous consequences. Primarily, cars would literally start flying. As car top speeds got faster, these engineers would examine cars violently lifting off the ground in an unpredictable fashion. Unfortunately, flying cars don’t tend to land gracefully. In this strange parallel world, Formula 1 racing would not exist. It would be a sad world indeed

Life (And Design) with Aerodynamics

As bizarre as it may be to read – yes, cars can generate enough lift to leave the ground temporarily. In aerodynamics, designers typically analyze airfoils (cross-sections of wings) for their ability to produce lift. When an airfoil has the right angle of attack and the airflow over the airfoil is fast enough, lift is generated. This phenomenon serves as the basis for the health of the entire aviation industry. Although a car is not as streamlined as an airfoil, at high speeds and with just enough of an angle of attack, cars can act like an airfoil and temporarily take flight with sometimes disastrous results. Faced with this phenomenon, designers must create control surfaces to counteract these aerodynamic forces. Unlike planes, however, these control surfaces (wings) are primarily designed to reduce lift and specifically apply downforce on the car. This downforce does two critical things:

As we will see, we cannot simply design to maximize downforce as this would increase drag and leave the vehicle susceptible to a phenomenon known as porpoising.

The main obstacle to overcome in this design process (besides added weight) is that these control surfaces create drag, reducing the car’s acceleration and top speed. Unfortunately, the wings that produce the most downforce typically produce the most drag. This is an example of the balance and tradeoff between critical design parameters in car design.

Formula 1 designers and engineers often overcome these opposing design constraints by creating variable control surfaces. These surfaces work by changing the angle of attack for the car’s wings to increase the downforce (at the expense of drag) on turns requiring more friction for traction while decreasing the drag (at the cost of downforce) on straightaways to achieve maximal acceleration. This compromise on performance is an example of designing against competing variables.

Computational Fluid Dynamics can play a critical role in optimizing car components in each one of these areas. Fluid-Structure Interaction modeling (a type of CFD/Multiphysics modeling) can enable designers to determine which materials and structures are both light and strong enough to endure the large aerodynamic forces exerted on the car. Combustion inside the engines is modeled and best understood through multiphase simulations, simulating how fuel and air mix optimally to get the best engine performance.

Finally, the aerodynamic controls are designed and sized to create the best stability and control while minimizing drag. By optimizing these variables in parallel, designers can achieve the best blend of performance between all the car components. While the workflow of design using CFD is straightforward, in practice, it can be very cumbersome/time-consuming.

At a high level, CFD works by discretizing a geometric surface and solving the Navier Stokes equations at each discretized node. The CFD design workflow includes designing geometry for a component, cleaning the geometry to be “watertight” (no holes or irregularities), discretizing the grid (known as meshing), initializing the solution/setting up the solver, and finally visualizing the results. Each part of the workflow can be tedious and clog up a rapid iteration design process. For fast and accurate design analysis, designers need a work platform that can handle each sequence of the design process accurately and efficiently.

CFD platforms like Cadence Fidelity CFD allow for rapid design iteration with superior accuracy. The platform includes tools like Autoseal technology, which allows geometric holes and irregularities to be fixed in a matter of minutes instead of hours or even days. This end-to-end platform also includes software like the Fidelity Optimization Solver. This solver allows for analysis with varying geometries and input conditions to analyze many design cases simultaneously. The Optimization Solver is helpful for designers who haven’t determined exact parameters but would like to understand the aerodynamics of many different configurations.

It is clear that CFD is critical at every step of the design process for an F1 car. By investing in robust platforms such as Cadence Fidelity CFD, designers can save precious time and resources. 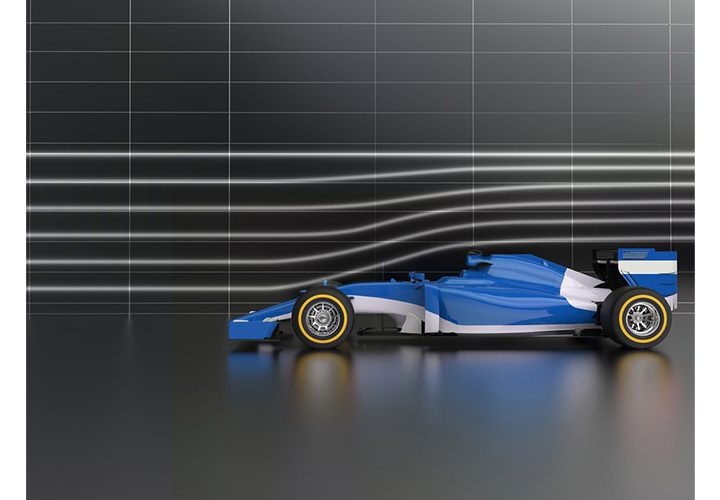 CFD is critical at every step of the design process of an F1 car.