Born through the merger of three previously independent organizations on 1st October 2003, the Japan Aerospace Exploration Agency (JAXA) is the organism responsible for aviation research and technology development. In addition, Its scope comprises space and planetary study, rocket development and launch of satellites into orbit development.

Aircraft design development was originally based on experimental techniques. Technical progress in computing power and extensive research in fields such as numerical analysis or turbulence modelling has lead to complementary use of both wind tunnel testing (WTT) and Computational Fluid Dynamics (CFD), with CFD codes utilization now widespread due to continuous increase of accuracy and reliability.

Aerodynamic Prediction Challenge (APC) is a series of workshops organised by the JAXA with the aim of tracking the progress of CFD tools with respect to challenges faced in aeronautical applications. The third edition was held in Japan June 28th, 2017. NUMECA took part in APC-III as contributor to Task 1, with NASA Common Research Model (CRM) aerodynamic prediction at cruise state and high angle of attack (presence of tail wings, reflected deformation measurement data).

The model under investigation is a 80% scaled copy of CRM at high speed (cruise state). CRM was developed by NASA to build experimental databases for the purpose of validating specific applications of CFD, with focus on the aerodynamic design of the wing. The geometry includes horizontal tail plane (HTP) at zero setting angle, which is same configuration used for NASA Drag Prediction Workshop 4 (DPW4).

A wind tunnel test (WTT) of the 80% scaled copy of the CRM was performed in the 2m × 2m transonic wind tunnel of JAXA and is therefore used as benchmark to assess numerical results provided by participants. Flow conditions correspond to Mach number M=0.847 and Reynolds number (based on wing mean aerodynamic chord) Remac=2.26 E+06.

Emphasis in the analysis of results is given to high angle of attack, particularly in the wing-fuselage junction. The prediction of detachment in flows parallel to corners formed by intersecting walls and exposed to adverse pressure gradient remains one of the main challenges of current turbulence models widely used in industry.

Two sets of meshes were used, both built and provided by JAXA to all participants. On one hand one set made of structured hexahedral cells. On the other hand, another group of hybrid tetrahedral dominant grids. Cell count was 9.15 and 29.98 million respectively. The difference in cell count is due to additional refinement for the hybrid grid at the leading and trailing edges of lifting surfaces, notably in spanwise direction. In those regions and in the intersecting walls the hybrid mesh follows structured approach.

Aeroelastic effects are taken into account using one mesh for each of the incidence angle of the range under investigation (-1.79 deg. – 5.72 deg.), which accounted for wing deformation data measured during WTT. The near wall mesh is very fine, with non dimensional wall distance of first cell in the viscous sub-layer (y+ < 1).

Explicit Algebraic Reynolds Stress Models (EARSM) with a non-linear constitutive relationship between Reynolds stresses and mean strain rate, such as SBSL-EARSM and SSC-EARSM, the latter developed by NUMECA with the aim of better predicting separated flows.

Finally, the study aims at evaluating the impact of numerical artificial dissipation introduced to governing flow equations. Both scalar and matrix dissipation algorithms were used.

Several turbulence models and scalar/matrix dissipation approaches were tested on structured and unstructured grids. Globally, the transition from linear to nonlinear region is well captured with FINE™/Open. Beyond this point, the turbulence models and the dissipation models have a larger impact on the solution, which is especially noticeable in the pitching moment and its slope (which drives longitudinal stability). SSC-EARSM provides the best results. Analysis of flow over wing suction side explains those differences.

Large Side-of-Body (SOB) separation bubble is predicted by SA-fv3 and SST-2003 models at high incidence. This is not in line with experimental data and leads to different flow patterns for the whole span and lower pitching moment. SOB is not observed with KE-YS-1993. However, shock wave location appears significantly downstream. Therefore, lift is clearly overestimated. SBSL-EARSM and SSC-EARSM model improve the predicted inboard flow and the location of shock in this region.

The excellent agreement between the model tests and CFD predictions for the pressure distribution over the inner suction side of wing provides a good confidence level in the CFD results presented to the APC-III workshop. Moreover, NUMECA SSC-EARSM results are encouraging, with significantly improved results with respect to traditional LEVM and with affordable computational cost.

Figure 2: Overview of structured and hybrid grids of CRM model (left). Non dimensional wall distance over the wing for one of the computations (right).

Figure 3: Detail of structured and hybrid grids of CRM model. 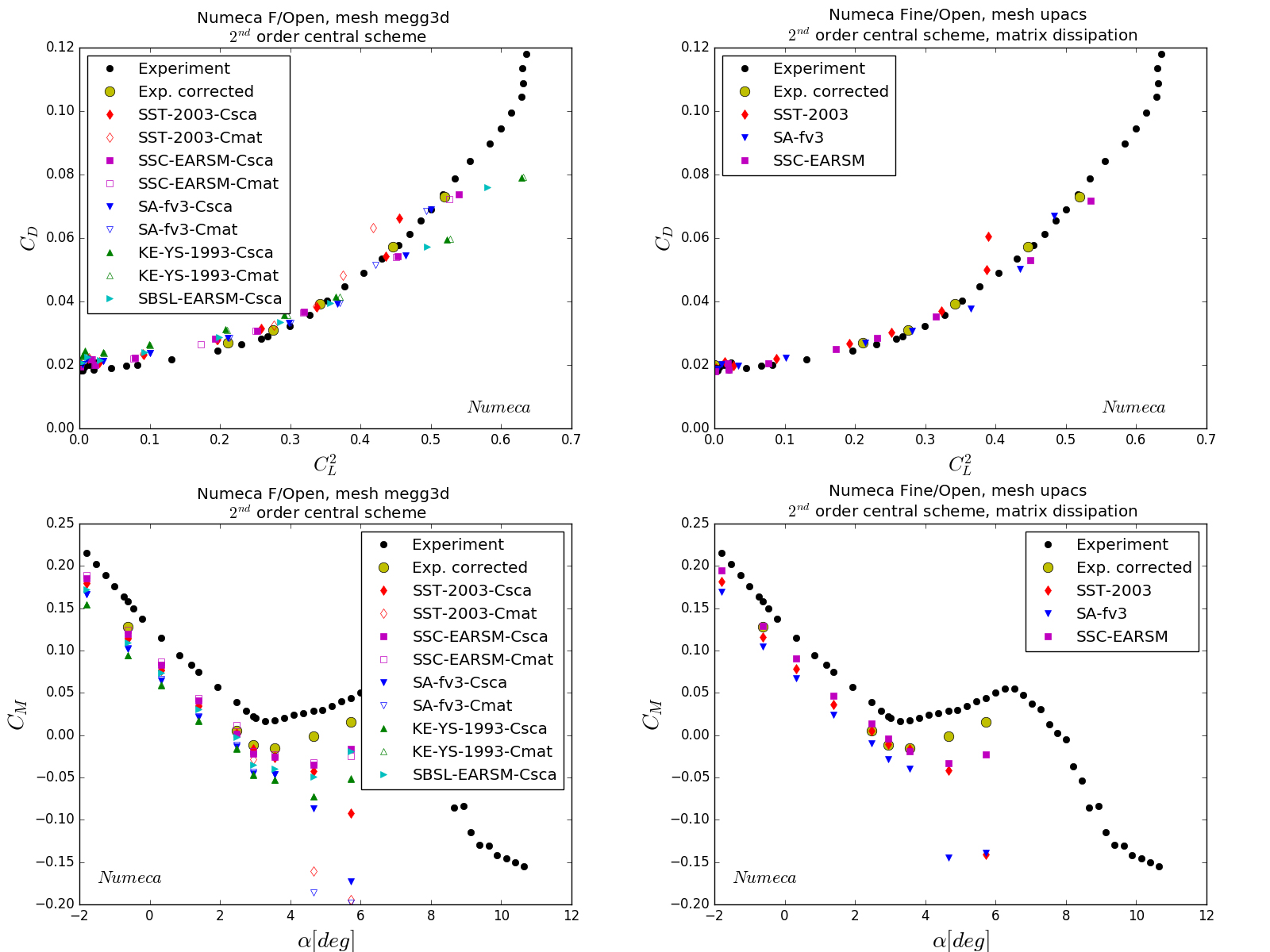 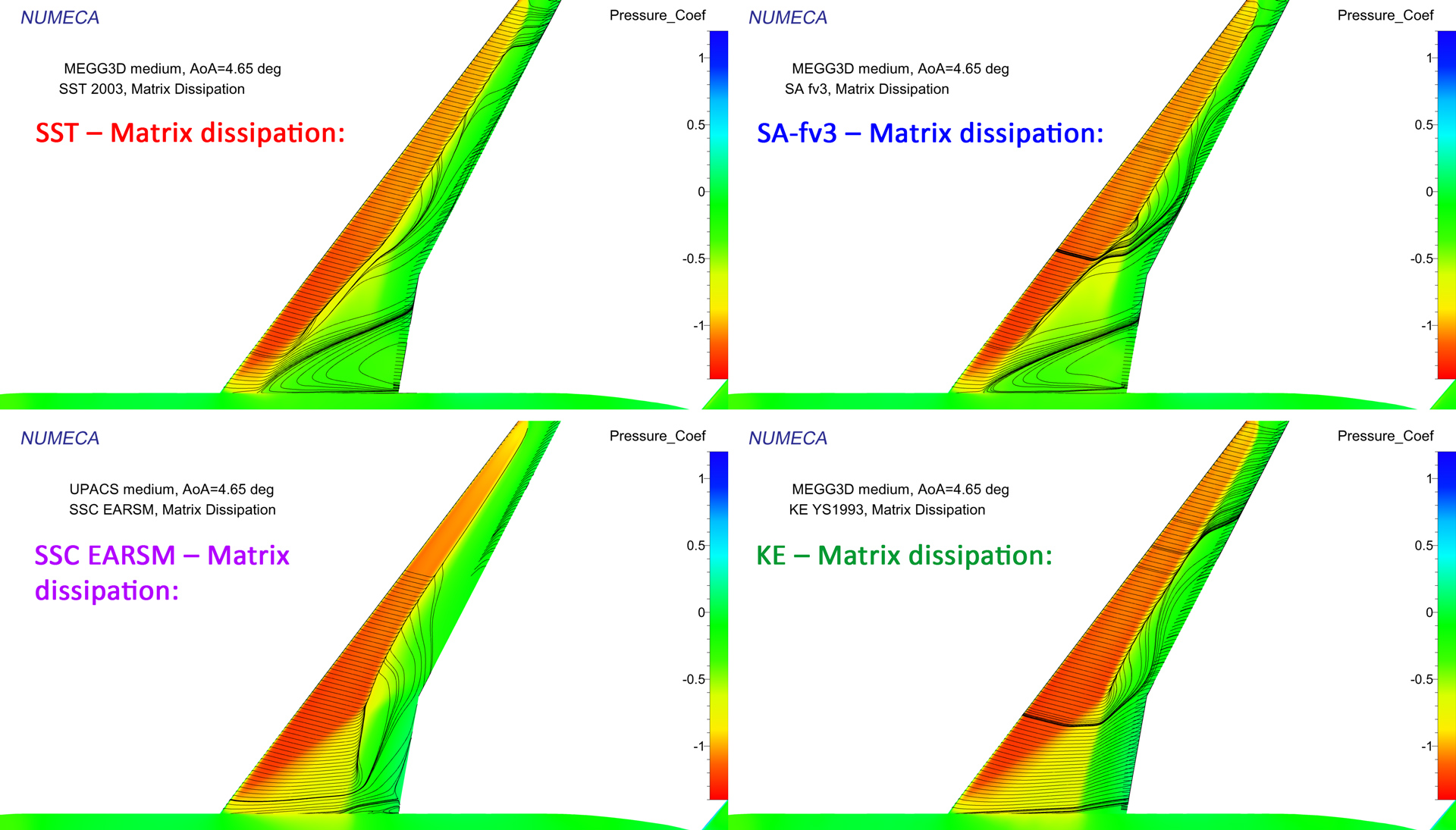 Figure 5: Pressure distribution over wing suction side at angle of attack 4.65 deg. for several turbulence models with matrix artificial dissipation.

Figure 6: Pressure distribution over wing section at 20.1% of span at angle of attack 4.65 deg. for several turbulence models with scalar dissipation (left) and matrix dissipation (right) computed on hybrid grid.