For the prediction of the resistance curve of a planing hull and validation against model tests, Marintek used FINE™/Marine and HEXPRESS™ in this user case.

The Norwegian Marine Technology Research Institute (MARINTEK) performs R&D in ocean technology for a global market, primarily in the maritime and oil and gas sectors and ocean energy. MARINTEK’s main offices and laboratories are located in Trondheim, Norway. A rational combination of physical and numerical modeling approaches has always been MARINTEK’s strategy in its research activities and commercial services. Prediction of vessel and propeller performances, design optimisation process, wake analyses and studies on propulsor-hull interaction are just a few examples of CFD applied to ship hydrodynamics. http://www.sintef.no/marintek/

The total ship resistance of a new patrol vessel in calm water conditions was evaluated by means of CFD simulations and model tests. The hull form was developed by STM and has as main dimensions:

The primary objective of this case study was to validate the numerical model against model tests in order to guaranty high level of accuracy to the End Client in the subsequent numerical phases of the project. CFD and model test predictions were compared for three speeds: 20, 45 and 55 knots.

The total resistance of the hull is computed by means of CFD simulations at different speeds. The simulations were performed with FINE™/Marine 4.2 at full scale, in deep water conditions, in sea water.

The vessel’s geometry is meshed using HEXPRESS™. A boundary layer grid normal to the hull surface is specified in order to reach y+ values between 30 and 80. Given the diversity of Froude regime covered in this study, new meshes were generated for each computed speed. Adaptive grid refinement was used with the free surface criterion in the proximity of the hull in the final stage of each simulation in order to increase the accuracy of the results. The final meshes were composed of between 5.0 and 7.5 millions cells.

The hull model is made of foam and wood coated with paint with a hydrodynamically smooth surface finish to the linear scale of 1:16. For turbulence stimulation, fine sand grains were glued to the hull along the keel from bow to station 17.

The resistance tests were performed with the model towed by MARINTEK’s high speed rig with measurements of resistance, trim and sinkage. In the model test setup, the model is free to heave, roll and trim but fixed in all other degrees of freedom.

The conversion from hull model (numerical or experimental) into full scale ship is made by using the form factor method. In this method, it is assumed that the total resistance can be divided into two parts, represented by the viscous resistance and the residuary (due to vorticity, wave making and wave breaking) resistance CR. The viscous resistance is determined by multiplying the frictional resistance CF with a constant form factor k0, which is identical for the models and the ship. Further, it is assumed that the residuary resistance CR is identical for models and the ship.

The following table compares the predicted total ship resistance obtained from the model test approach and the CFD approach. For all speeds, the results agree within 0.7 %. The hydrodynamic trim angle agrees within 0.5 deg. This is a satisfying result, given that trim measurements are not corrected for scale effects and that the CFD mesh could be even further refined around the hull to address more accurately this application, which was not necessary in this study.

The excellent agreement between the model tests and CFD predictions for the total ship resistance in calm water condition results in a good confidence level in the CFD results presented to the End Client. 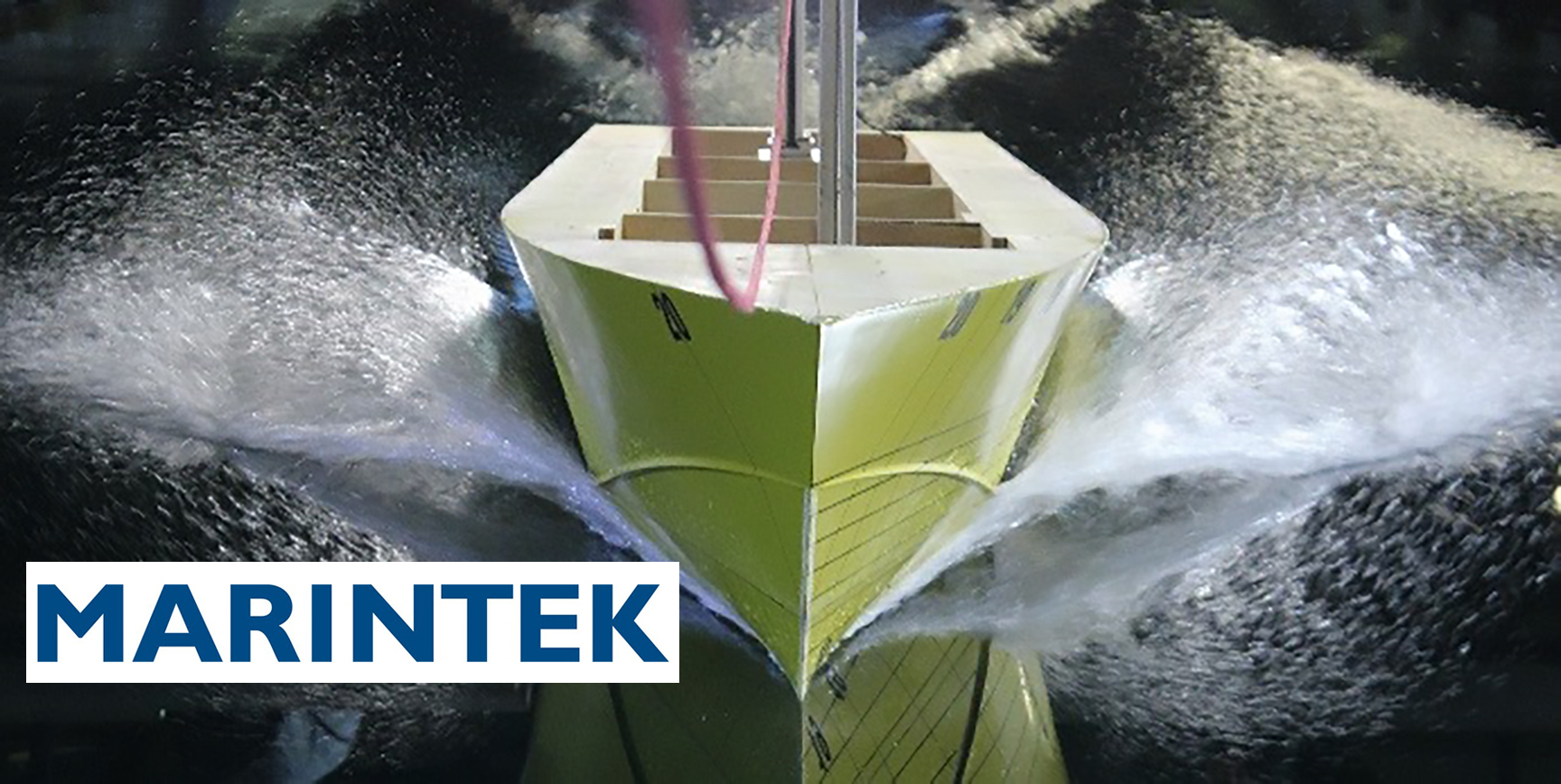 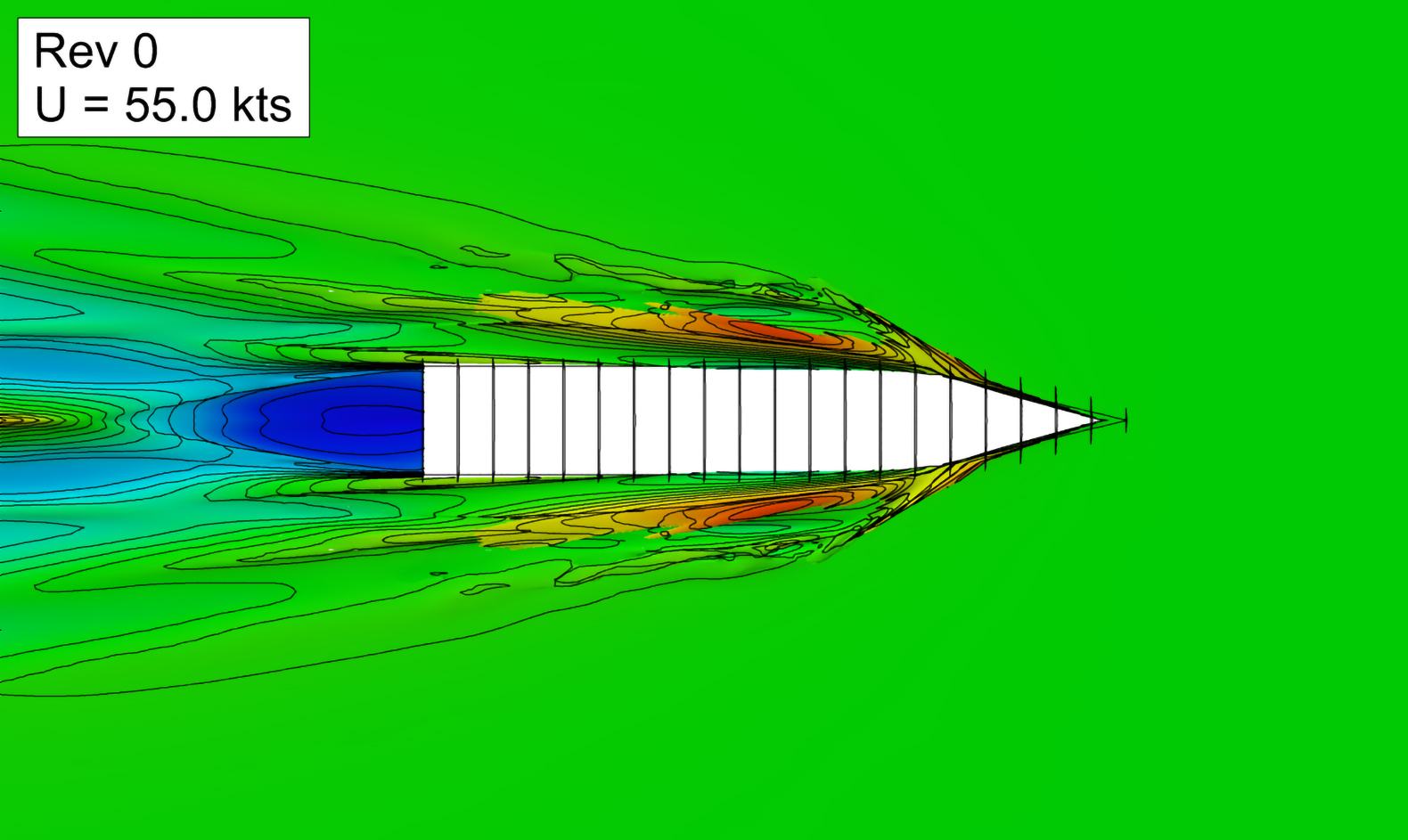 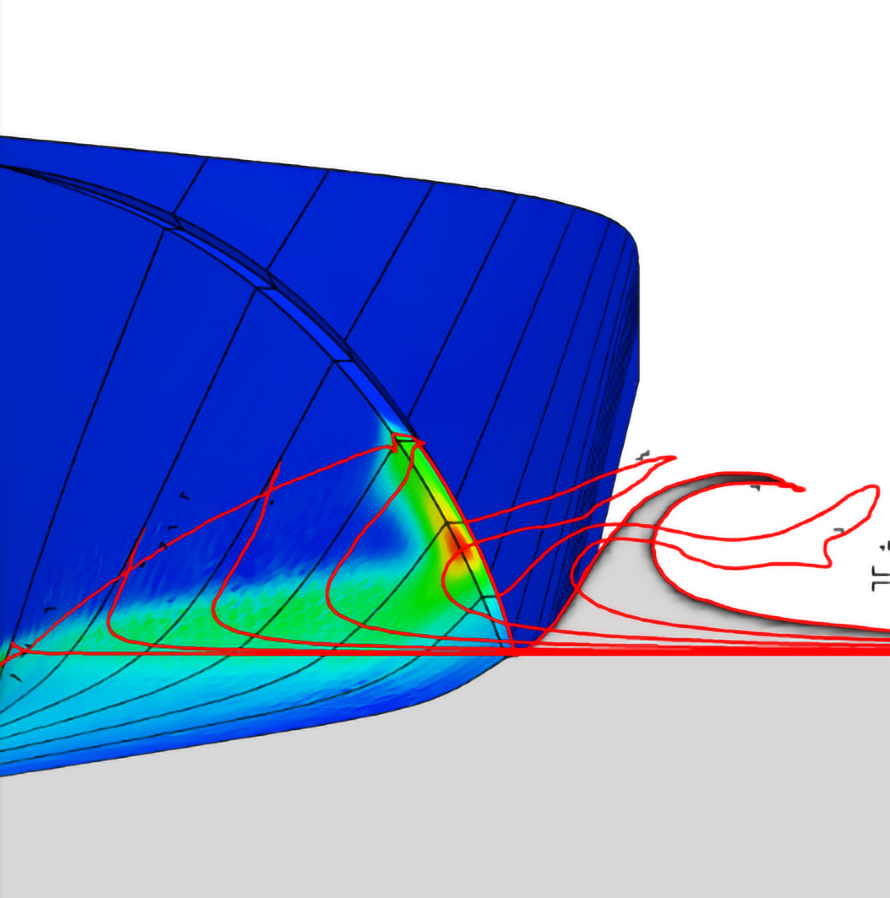 Figure 2: Bow wave profile at various hull stations and hydrodynamic pressure on the hull at 55 knots

Figure 3: Bottom view of the hull and wave pattern 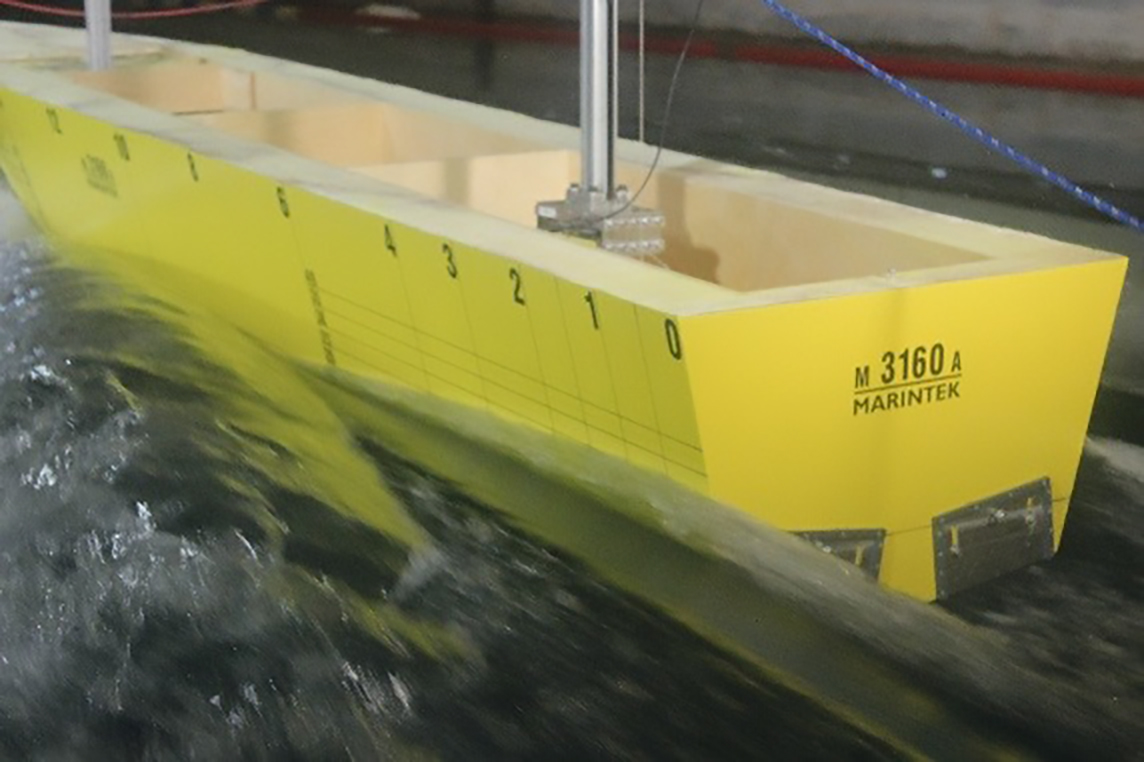 Figure 4: Perspective view of the hull and wave pattern 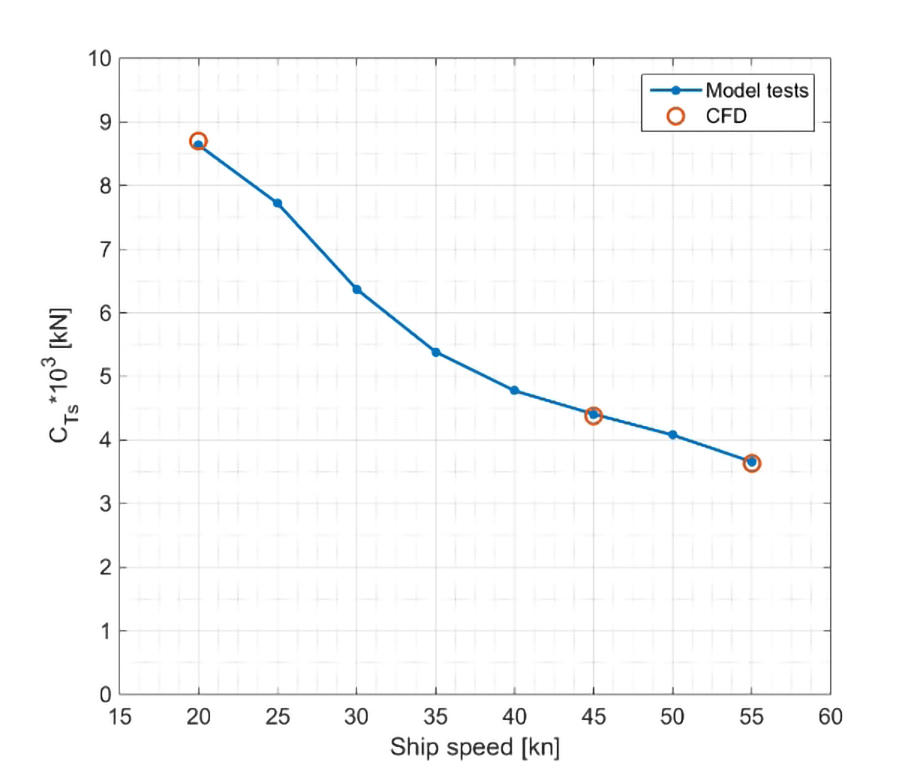 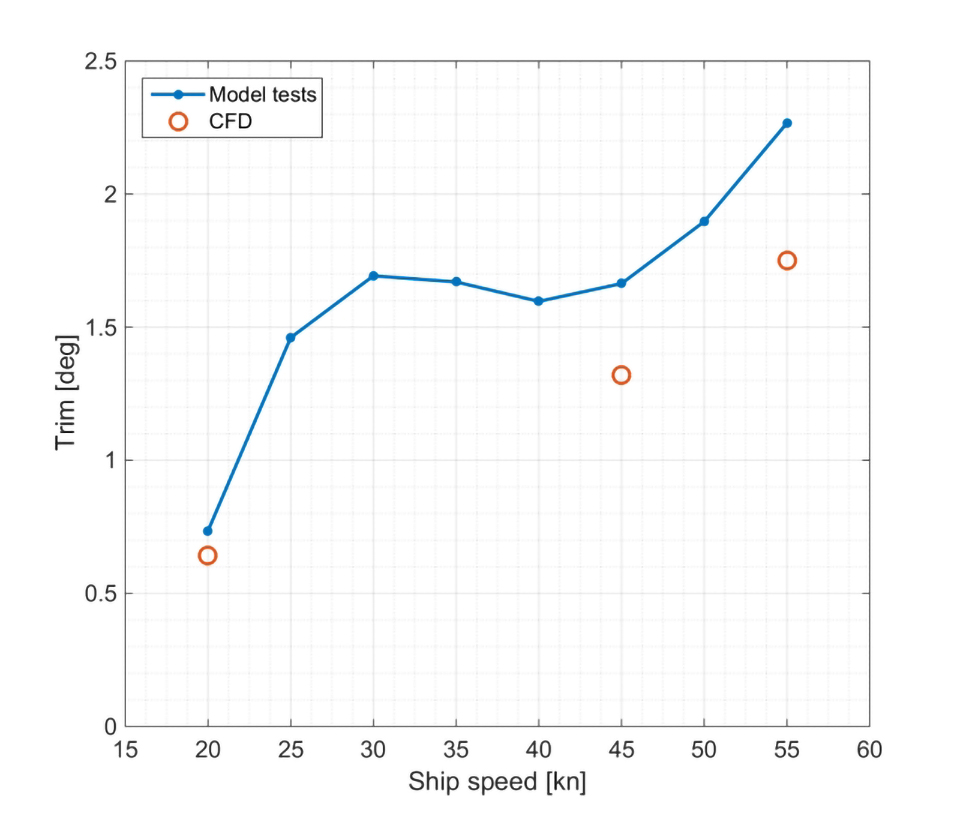