is a world-leading designer and manufacturer of small aircrafts specializing in energy-efficient and affordable high-performance aircraft. The first company to fly an electric two-seater in 2007 and the winner of the NASA Green Flight Challenge in 2011 (with the world’s first electric four-seat airplane), Pipistrel has designed nine different experimental and serially-produced electric aircrafts, including the first type certified electric airplane, the Velis Electro. Pipistrel has also developed several propulsion systems, including batteries, power controllers and electric motors, for small and general aviation class of aircraft for NASA and Siemens, among others. With involvement in various standardization committees and research projects, Pipistrel is helping to enable the future market of hybrid-electric aviation.

One such research project that Pipistrel is participating in is the Aircraft noise Reduction Technologies and related Environmental iMpact (ARTEM) project. The ARTEM project’s objective is to develop novel technologies to reduce aviation noise emissions for the engines and airframes of future aircrafts. Pipistrel is leading the investigation and mitigation of noise emissions of Distributed Electric Propulsion (DEP) systems. DEP systems, which are gaining popularity in the age of electric aviation, use multiple propulsion units distributed about the airframe. Since they are only connected electrically to energy sources or power-generating devices, the propulsion units can be placed, sized, and operated with greater flexibility and provide improved performance over more traditional designs. Some of the main benefits of this propulsion system are shorter take-off and landing, reduced energy consumption for increased flight ranges, and noise reduction. The technology offers numerous integration capabilities for a wide number of future aircraft concepts.

For their role in the ARTEM project, Pipistrel designed and manufactured a DEP mock-up, which serves as a validation platform for various new methods, designs, and low-noise technologies. Its aerodynamic design was based on FINE™/Open solvers using HEXPRESS™/Hybrid’s grid generator. For fast aerodynamic design, an actuator disc approximation was used, while for more refined design, steady and unsteady solvers were employed, as shown in Figure 1.

Pipistrel and its project partners are studying noise source and propagation in the near- and far-field of the DEP design, but the main drawback of using Navier-Stokes CFD for the computation of input data for noise propagation codes (from the designer point-of-view), is its high computational cost. Time-domain (TD) Navier-Stokes simulation of the DEP’s periodic flows requires long runtimes, as several rotor revolutions need to be computed before achieving periodic state.

Figure 2 shows the evolution of the thrust of one propeller blade over one revolution by both TD and NLH methods. The periodic unsteady perturbations linked to the interaction between the propeller blades and the wing are modeled using Fourier harmonics, whose frequencies are associated to the periodicity and to the relative rotational speed between these two components. From a theoretical viewpoint, an infinite number of harmonics would lead to a perfect match with the traditional time-domain solution. From an engineering viewpoint, the NLH method has proven to satisfactorily capture the same complex unsteady flow phenomena as the TD method, using as few as three complex harmonics.

FINE™/Open’s NLH method proved to be the most cost effective approach for acoustic optimization analysis of the DEP set-up. The method offered a speed-up between one to two orders of magnitude in comparison to the TD analysis, while providing very similar accuracy.

NLH technology offers a fast alternative to conventional TD methods for solving unsteady periodic flows and can easily fit into an industrial workflow. 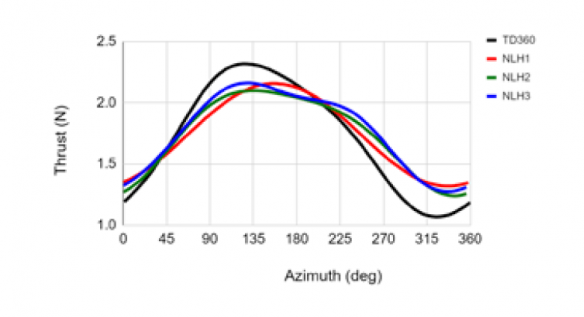